If you are even somewhat technologically savvy, chances are you have one or two old devices just sitting around taking up space in your home or office.  You may even have an old tablet or two collecting dust.  Sometimes, this happens because our old devices just become too out dated to be useful anymore.  Of course, other times, they end up taking up space because we did something to them causing them to break.

One of the most common problems with tablets is a broken screen because it was dropped.  It happens all the time even to the best of us.  But what do you do once you have a tablet with a broken screen?  Do you keep using it or just replace it.  Most of us replace it unless it was a brand new tablet that we just happened to bring home.

However, just because your tablet has a broken screen, that doesn’t mean that it is no longer useful.  Today, we are going to look at what to do with a tablet with a broken screen so you can get a little more useful life out of your old tablet even if you no longer want to use it as your primary mobile device.

Before we get to the fun stuff, let’s look briefly at some of the more obvious choices you have available to you.  While these may not be as cool, they are all worth considering especially if the tablet isn’t all that old.

You could always take your tablet in and have it repaired.  While it may cost you a little bit of money out of pocket, it is definitely the easiest way to gain access to a second tablet in your home or it can save you money over buying a new one, provided it’s not a serious budget tablet that might cost more to repair than replace.  Just make sure you use an authorized repair shop for your particular tablet so you are sure to get quality replacement parts straight from the manufacturer and not third party parts which can be of questionable quality.

Instead of bothering trying to repair it, you could list it on eBay or other sites such as Craigslist for sale as is.  Just be up front about the screen and reduce your selling price a little because of the screen and let someone else deal with it instead of you.  A quick note about selling online, make sure you take a few good pictures of the tablet and show them the state of the screen and try to track down as much of the original packaging as you can.  This will increase your chances of selling it.

In some cases, you may not be able to repair or sell your old tablet and you don’t want to try and find other uses for it.  If that is the case, you can take it to your local electronics store such as Best Buy and inquire about recycling it.  Just make sure you wipe all the data off of it first before you turn it in and do your part to save the environment. 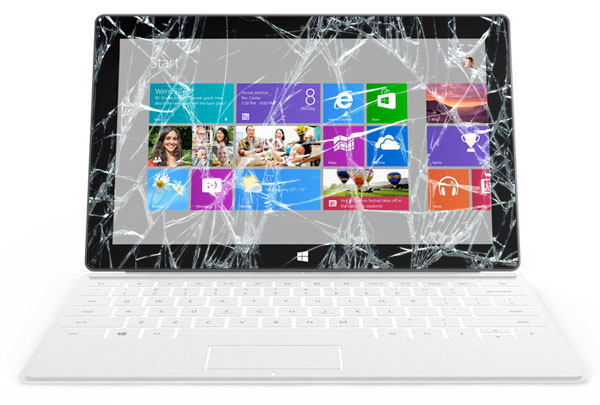 Now that we have discussed some of the more boring ways you can take care of that tablet with the broken screen, it is now time to look at some of the more fun and interesting ways you can reuse your tablet.  These ideas can help you get a little more use out of your tablet before you must finally give it up and can even give you more functionality at your home or office often without it even costing you a dime.  In some cases, you may have to invest a little money to make these solutions happen, but it is much less than you would spend for a repair.

It should be noted that your success on some of the following ideas will depend on what features came with your tablet.  Not all tablets are built alike.  Some have ports, others don’t.  Some have large amounts of storage, while others include very basic storage.  Before you undertake one of these projects, make sure your tablet has the proper connections and hardware necessary to turn these projects into a reality.  Now that we got that out of the way, let’s take a look at what to do with a tablet with a broken screen.

One of the most common solutions that people do with their old tablets, setting up your own media player is pretty easy using just a few apps and a cable to connect your tablet to your television.  The best options for you is to create both a local and a streaming media player connected to your television.  This means that you use a player and copy movies and music to it while at the same time also using many of the streaming services such as Netflix to stream straight to your tablet so you can watch it on your television screen.

This is the perfect setup for people who don’t have Internet ready televisions but still would like to enjoy Netflix and other downloaded content on their television screens.  However, you will need to watch your local storage limits so you don’t run out of space and you will also need to make sure that your tablet can be connected to a television in the first place using an HDMI cable.  Not all tablets are created equally and some offer connectivity options that others don’t.  If you don’t have a place for a cable, you are often just out of luck and will have to look at other uses for your old, broken tablet.

Who doesn’t love a good tablet game?  Sure, they are nowhere near the type of game you will find on a typical console such as a PlayStation 4 or Xbox One, but with the right accessories and connections you can create a cool mobile gaming station on your television.

I admit, this one isn’t without its limitations.  Tablets aren’t known for having gobs and gobs of storage.  They are often quite limited.  Still, your old tablet could turn into a handy mobile file server for you and your family and could be a great way to share files with your family.  For best results, your tablet will need as much memory as possible both internally and through the often included microSD ports.

Simply wipe away any unwanted apps and data off your tablet, setup the file server using one of the many apps that are available, and then connect your computers to it using your wireless network.  In just a few short minutes, you could have a small, mobile file server ready to store whatever you want to put on it.  Just remember, no matter what your storage amount will be limited, so make sure you remove anything you no longer need so you don’t run out of space.

This is one of my personal favorite uses for an old tablet, although you may need a little skill in setting this up.  There are many apps out there that can turn a tablet into a mobile security camera and they are available for very little money.  Download the app and then figure out where you want to setup your tablet.  I wouldn’t recommend setting it up outside as tablets don’t play nice in bad weather, but they make a great camera to watch your doors or windows if you like.

Once it is setup, you can then stream the camera feed straight to your computer and sometimes straight to your new tablet as well so you can keep an eye on your home even when you are not there.  And you do did it without having to invest in potentially expensive video surveillance equipment.

I’m sure many of you are asking yourselves why you should even bother with trying some of these fixes.  Just get a new tablet and move on.  While you can definitely do that, remember you have already invested a good amount of money into these tablets and it is really a shame for all that money to go to waste.  At the same time, for people who love fooling around with technology, turning your old devices into something else useful can be a fun little side project.  I know I at least enjoy it!  You could also create a use for these devices that you never knew you would want and/or need before.  After all, there is nothing wrong with a nice streaming player connected to your entertainment system, is there?

Ultimately, the choice is up to you.  If you are pressed for time, these may not be the best choices.  But if you are looking for a new hobby, why not start fiddling with your old technology.  You could learn something while giving both yourself and maybe even your family something new to play with and enjoy.

Just because your tablet has a broken screen, doesn’t mean that it is no longer useful.  On the contrary, there are many different uses you can find for your old tablet.  With a little time and maybe a small investment in a few accessories, you can transform that glorified broken paper weight into something that you and your family could enjoy for hours and hours before the time really comes for it to be retired.

After all, that broken tablet still cost you quite a bit of money and it would be a shame for all that money to be flushed down the toilet simply because one day you or one of your kids had butter fingers.  So don’t fret if your tablet’s screen is broken.  Remember, there are still many different ways you can use that tablet to add security to your home, entertainment and much more.  By doing so, you can breathe new life into your old tablet instead of letting it waste away in the corner.

Do you have any ideas on how to use an old tablet with a broken screen?  If so, let me know in the comments below!