There is no denying that tablets have come a long way since the release of the original Apple iPad just a few short years ago.  Today, you can find tablets running Apple’s iOS, tablets powered by Microsoft Windows and tablets powered by Google’s Android operating system.  While Apple may have cornered the market on style and ease of use, Google’s Android operating system has risen to become the leader in the market with more tablets and smartphones sold than any other.

Unlike iOS, Android isn’t as controlled and regulated giving users much more freedom over their devices.  No matter what version you may have, Android is the mobile operating system for tinkerers.  You can customize it how you want it to be and even install apps to control and optimize the performance of your tablet.  From cache cleaners to CPU overclockers, there is an app that is perfect for you whether you are looking for something just to clean things up and make it run smoother or if you want to truly bring out the power of your system you can even overclock the CPU to run faster than you ever imagined.

Today, we bring you seven of the best free apps available designed to boost the performance of your Android tablet so it runs better and faster than you could have ever imagined.  Each of these tools offers its own unique take on cleaning and optimizing your Android and while some may perform some of the same tasks, installing a few of these on your Android tablet will give you access to a wide range of tweaks and cleanup options that can boost your Android tablet so you can work and play on a device that runs cleaner and faster than it ever has before. These apps are especially true if you bought a tablet for under $100 or under $200 as these tablets will have limited hardware power.

Some of the apps on this list you will notice require root access of your Android tablet.  Rooting is the process of allowing users running Android on their tablets or smartphones the ability to gain what is known as privileged control or root access.  While most apps don’t need this type of access to your device, some of these apps that allow you to perform some of the best performance tweaks to your system will require this level of access.

Rooting can be both good and bad.  It is perfect for users who want to use some of the more advanced apps that need more control over the system in order to function effectively.  However, it can bring a whole new host of problems as well as the elevated access can allow malicious software further access to your device.  In addition, you will have root access with everything you do, which could lead to problems if you make a mistake and accidentally delete something that you shouldn’t.

Unfortunately, rooting your Android tablet is not a process that works the same way on every device.  In order to root your device, you must search for the correct process for your specific device right down to the make and model.  If you don’t, the process could fail, or worse, completely brick your tablet preventing it from booting up entirely.  If you want to root your device, I recommend you begin the search for your device at Android Central, as they have instructions for rooting the device of many of the most popular Android tablets on the market. 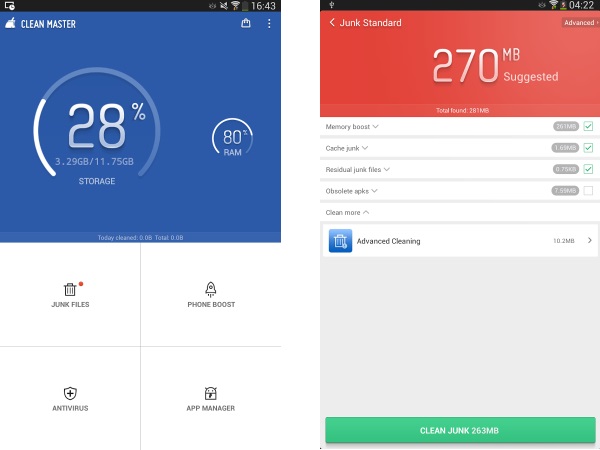 Clean Master is an all in one tool designed to help you keep your Android as clean as possible.  Its Junk Files tool will clean your tablet’s app and system caches as well as temp files.  It also includes a boost tool, app manager and even antivirus software.  While task killing isn’t the most reliable performance boost, the app manager and Junk Files cleanup make this app worth your while.  It can also backup APKs as well and even move apps to an SD card if you need to free up space on your internal storage.  Most surprising is the antivirus tool, which scored highly in many of the latest antivirus surveys. 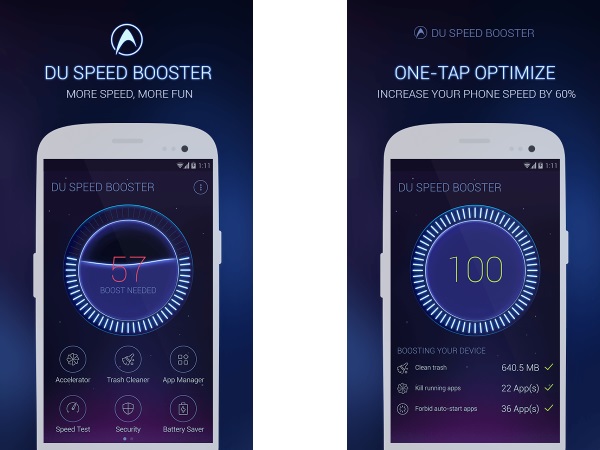 Another Android optimization tool much like Clean Master, DU Speed Booster can easily help you remove all the junk that you simply don’t need on your tablet.  It can remove app cache files and clean up junk files, and it even includes a one touch accelerator to improve performance and an antivirus scanner to remove any mobile viruses you may have picked up while using your tablet.  While the benefits of task killing are debatable at best, DU Speed Booster sill comes with a wide range of cleaners and its app manager make it worth a serious look for anyone wanting to keep their Android in tip top shape. 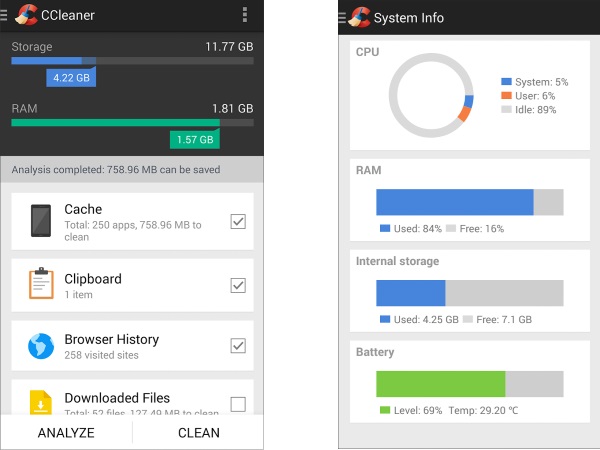 CCleaner has made a name for itself as one of the best PC maintenance apps for Windows and even Mac.  Now, with their Android app, you can have access to this great tool on your Android tablet.  Like its big brother, CCleaner for Android allows you to clear application cache, empty download folders, browser history and other temporary files and this version will even help you clean your call logs and SMS logs.  CCleaner also comes with app managers, CPU, RAM and storage meters so you can keep an eye out on your tablet. 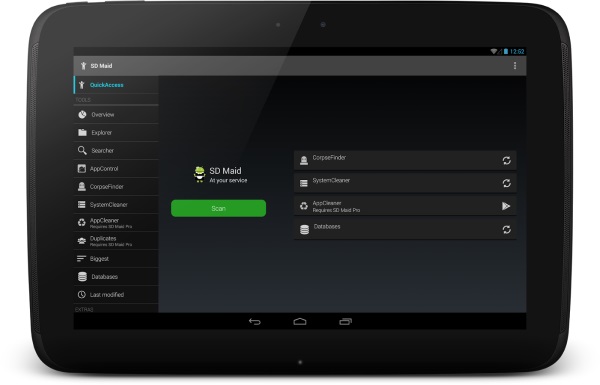 You only have a finite amount of storage available on your tablet, making it more important than ever to keep your internal memory and SD card clean of old, useless data.  SD Maid is storage maintenance app designed specifically to take care of your storage.  It will remove unwanted or useless files and clean up widowed files and folders left behind by uninstalled apps.  It also doubles as a file manager so you can organize your files the way you want them.  There is a free and a paid version of this app and, while the free version will give you some great tools to use, there are many more features available in the paid version. 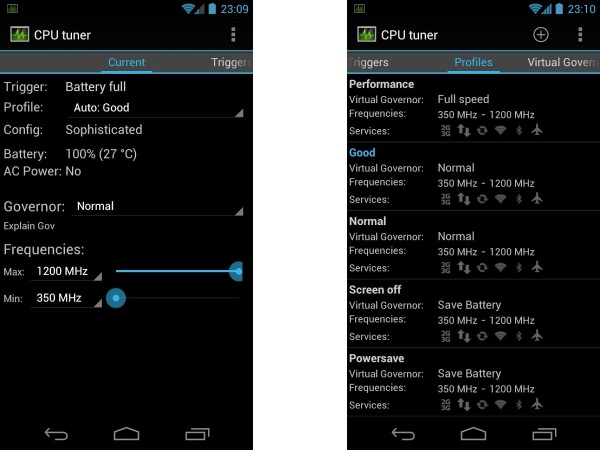 CPU Tuner does exactly what it sounds like it does.  This app contains tons of settings to tweak your CPU.  You can overclock for more power or even underclock your tablet if you want to save your battery.  One of the nicest features it gives you is the ability to create different performance profiles so you can make sure your CPU performs exactly the way you want it, when you want it.  Remember to make sure you check what your hardware is capable of before trying to overclock it. 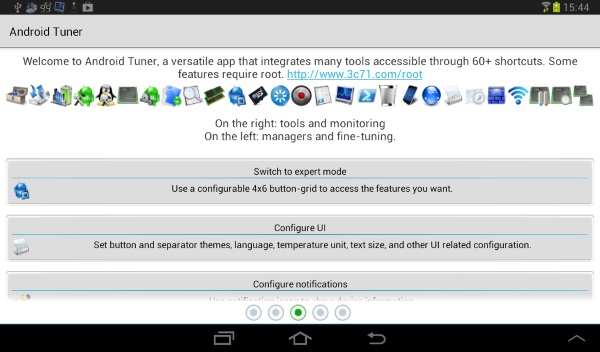 3c Toolbox, formerly known as Android Tuner, provides users with a huge array of tweaking and diagnostic tools that you can use to diagnose and improve the health of your system.  The toolbox includes a task manager to help you kill your apps, backup or restore APKs, CPU tweaks, cache settings and more.  Just remember that before you begin tinkering with any of the settings you should do your homework otherwise you could do more harm than good. 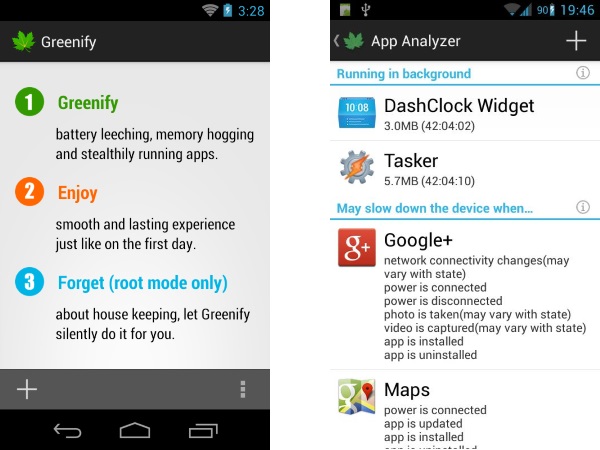 Greenify essentially places the apps you have opened but aren’t using anymore in a state of hibernation, preventing them from running in the background updating themselves and using precious processor and bandwidth in the process.  When you load the app, Greenify releases it so you can use it and then puts it back to sleep when you are finished.  Just remember not to add your alarm clock or messenger apps to Greenify, as they will fail to notify you or wake you up in the morning if they aren’t open on your screen.

These seven apps represent some of the best tools available for Android that allow you to clear out cache files slowing down your system and even tweak the CPU settings to bring out a few more gigahertz out of them so your tablet is faster than ever before.  Try each of them out and see what you think about them.  Play around with them and find what combination of these apps works best for your Android tablet based on what you want to do and how well they work for your particular model.

Remember, each of these apps is available free of charge so there is no harm in giving each of them a fair shot to see how well they work for you.  I can almost guarantee that after you try these, you will discover that your Android tablet runs much better and faster giving you an even better tablet experience than you thought was possible.